Why Every Digital Costume in “Avatar: The Way of Water” Really Exists

Daring adventures, illuminating discoveries, and unbelievable wonders are hallmarks of James Cameron’s blockbuster films. In trademark fashion, Avatar: The Way of Water is a technological feat that developed new filmmaking tools in production. Yet, costume designer Deborah L. Scott (Titanic, Back to the Future, Avatar, E.T.) said that is all secondary to Cameron’s driving force. “Jim doesn’t like sci-fi that much,” she noted. “You can see it even in Aliens. He comes back to what’s plausible. What human things will always be there.”

It’s that human touch that gives the largely CGI film its credibility, which led Scott and her team to create over 2,000 garments – even though a tiny fraction of practical creations are seen on screen. “We actually made, in The Way of Water and further into Avatar 3, we’ve made every single costume,” Scott revealed. “Every costume, every prop, every piece of jewelry. I did all the hair designs, the tattooing—all that. Everything was sort of under the umbrella of the costume department.” 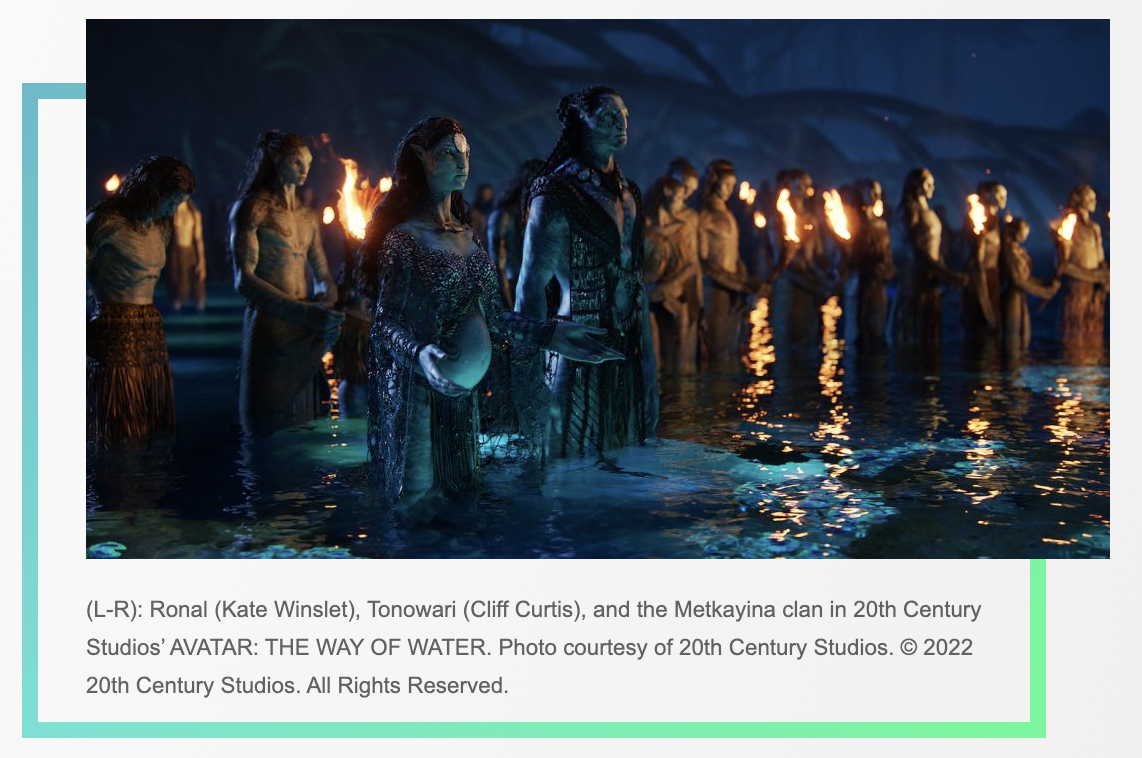 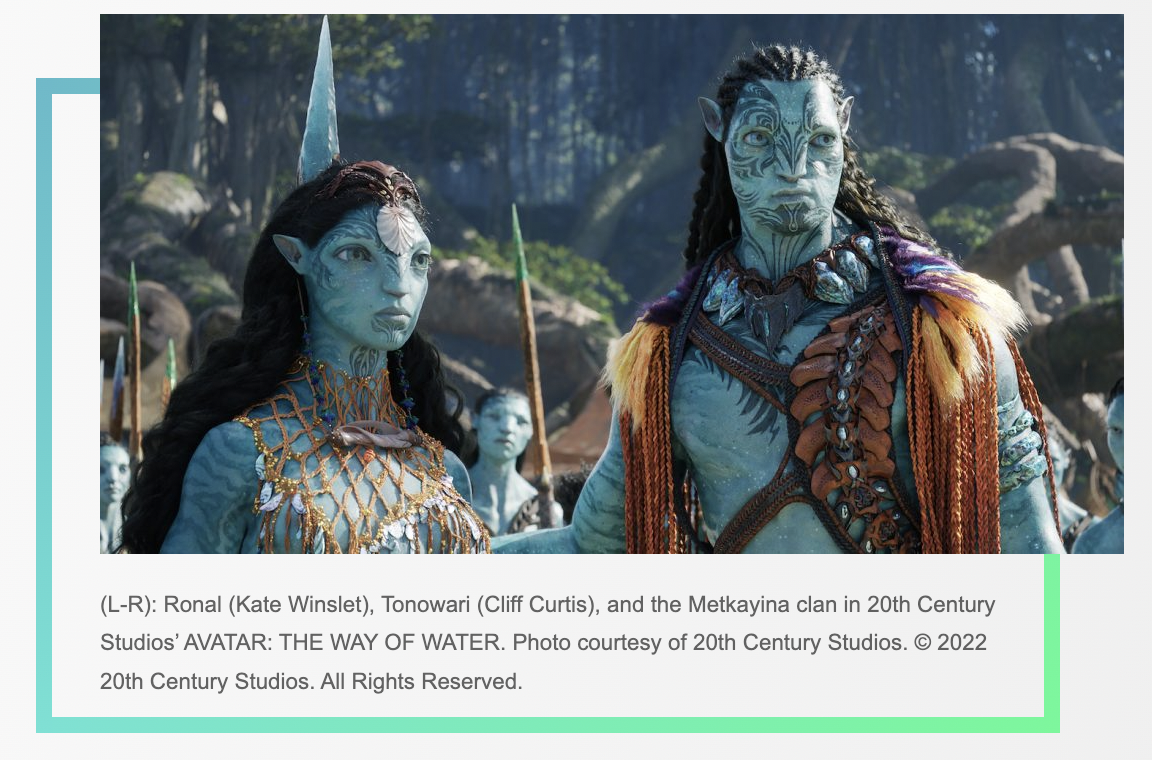 Pandora is a moon filled with wonder and mystery. Nowhere on Earth could stand in for the fantastical lunar world, which led to a massive motion-capture undertaking. Artists transformed the actors’ performances into the Na’vi and their costumes were drawn digitally in place of the gray motion capture suits. Scott’s work not only established the look of each character but also helped the actors define their movements for their final performance. 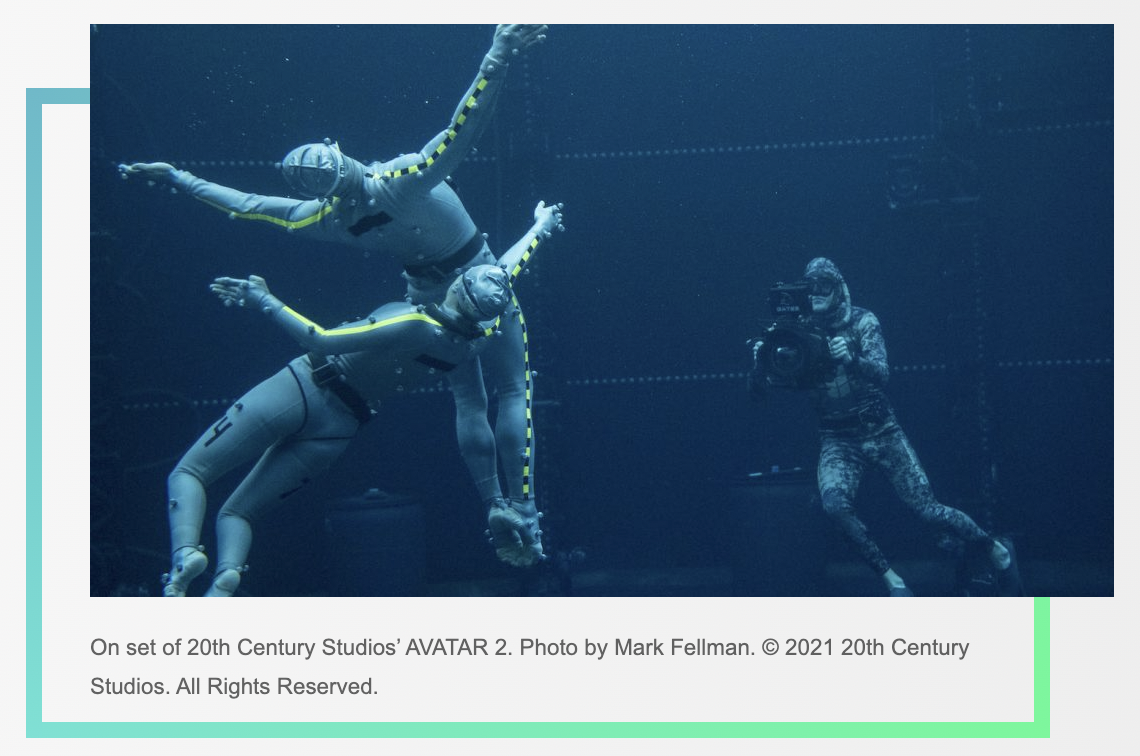 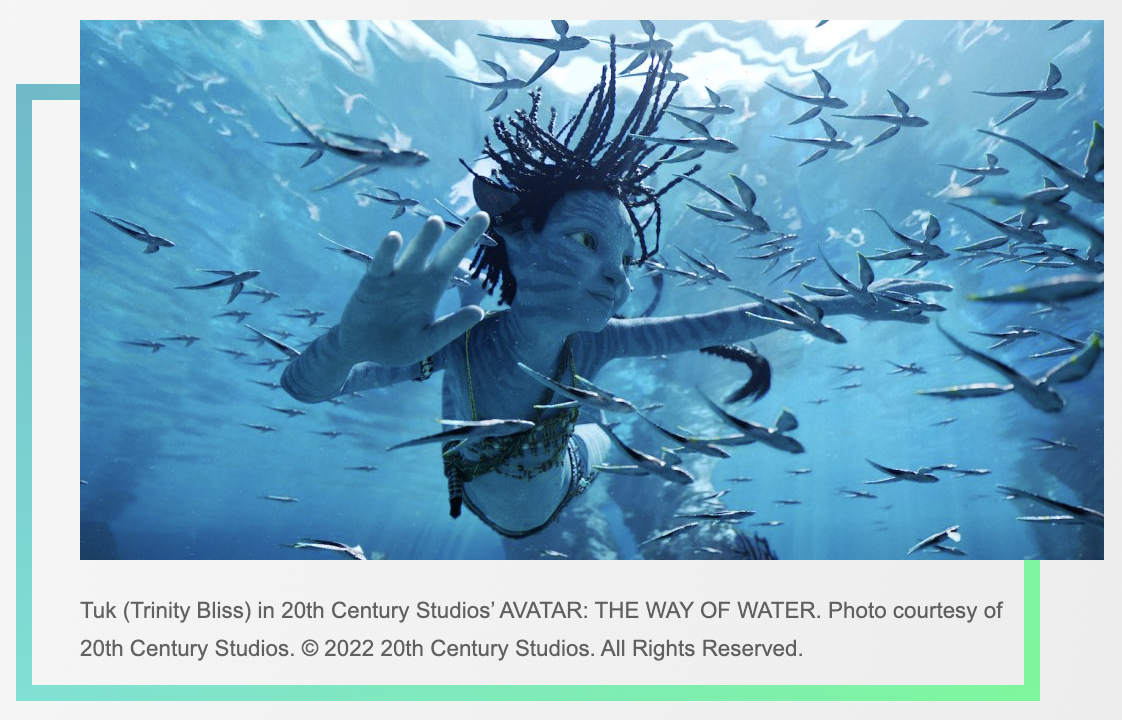 “You are doing reference costumes for set work because performance capture on set, you can’t occlude the markers on the body,” Scott noted. “It was important to Jim to give the actors a sense of time and place with their character. The costumes we made all to human scale for the purpose of putting them on people when needed. So that when an actor needed to know how it would be to dance around with that piece on, we put the piece on and let them dance around and shot a lot of reference for the digital people.”

Testing became a critical component of developing the film. Although the Na’vi home world is filled with mythical creatures and landscapes, departing too far from reality could prove to be a distraction. That meant grounding the physics of Pandora in familiar science. Fabrics, beads, and other materials needed to move in a believable way. 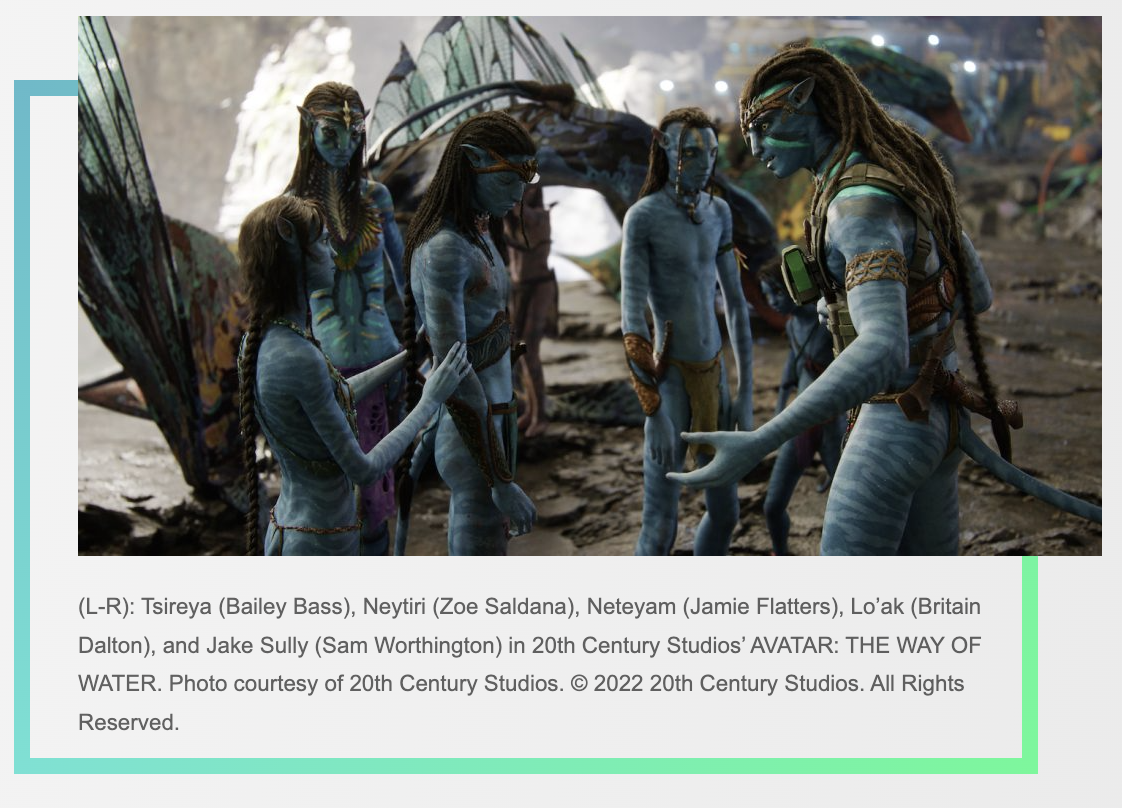 “Let’s do a proof of concept and build a costume maybe not as complex or as expensive as the real thing but something we can put in the water. See how it works. See if the fronds flow in the right way,” Scott explained.

That information could be used to program the way the costume functioned in the final scenes. The computers had to be taught how to process each piece. “Their computers don’t understand that costume because they have no reference for it,” Scott observed. “You can’t say, ‘We know in our program how a t-shirt works.’ This is like, ‘What is that?’ So the computer has to be fed – the simulators and the animators have to be fed a certain amount of information. That’s why the samples were even more important.”

The costume department’s role was so expansive that it served as inspiration across all areas. Because their work was being produced in a tactile way, other departments could study the fabrics, textures, and designs and be inspired for their own contributions.

“For the most part, my department was the one that created all the samples. So the weaving techniques, the colors, and things like that would inform the production design. Especially Dylan [Cole], who did the Pandoran world. He could come through and say, ‘Oh, this is what you’re up to. Oh, that’s an interesting weaving technique,’” Scott recalled. “That’s not necessarily in their wheelhouse. That’s costuming, and they could extract what we were doing and use us too. It was pretty hand in hand.”

Although a massive undertaking, Scott insisted that the comprehensive approach to designing beyond the characters’ clothing felt natural. “Because of the performance capture and because you’re working in this virtual world, ultimately, the door to costume design gets wider, bigger, and we can just jump in and take our place there. When I was designing characters, it was natural to design them head to toe. It was natural to put the hair in so that you’re establishing the way these people look.”

The clans of Pandora have incredible bonds with nature. Their native plants and animals provide the resources to handmake their garments. Scott noted that an even stronger tie was established in The Way of Water to reflect how they might obtain the elements of their attire.

“They draw from their environment so they’re drawing from different materials,” Scott noted. “Where you would use a snake in the forest, you’re going to use a sea snake in the ocean. You use animals. We really incorporated birds this time. We used feathers in the first one, but it was never explained. So Jim kept putting birds in shots. Like yes, especially on the ocean, we have birds. There are water birds. So there’s always a touchstone to reality.”

Every detail was researched to be as authentic as possible. Being a warm weather climate, Scott and Cameron focused on the crafting techniques of the indigenous cultures of Oceania as a guide. They then tested various elements of the costumes to be sure that they would be durable and useful as intended.

“I had an incredible team, mostly at Wētā workshop in New Zealand. These are people who really still value handicrafts. They were just constantly making samples. ‘How about this kind of knot? How about this braid? How about this color? How about this material?’ So we had all this research time to develop samples,” Scott said. “At the same time, sculpting things, carving things. ‘Is this shell too soft to carve? Is this shell going to break if you carve it?’”

Some of the film’s more futuristic pieces also tapped into the latest technology. Items like face masks could be modeled in a computer, then built, molded, and cast. Scott noted that 3D printing was “a wonderful tool, but we relied on our hands.” In the end, techniques like weaving, embroidering, beading, and braiding that Scott has mastered throughout her career proved to be the most valuable. 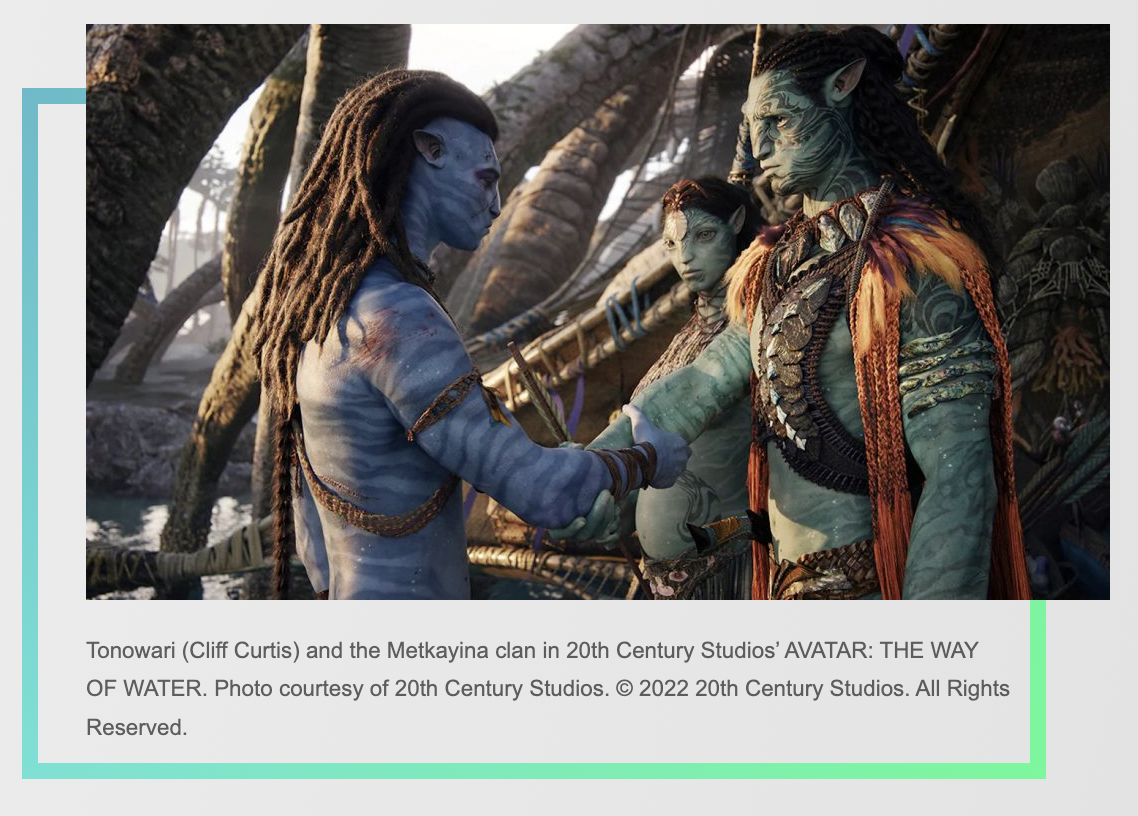 “As a costume designer, there was new technology being developed as we were doing it in real-time,” she noted. “I’m not used to working on a computer. We’re kind of hands-on people. So, that was different. What was absolutely the same is just trying to design costumes for characters. That’s pretty much it. Across the board, that’s always the same. These characters just happen to live on a moon.”