“It was a total restart,” production designer Chris Kennedy tells us of the Apple TV series Shantaram, which follows the daring life of an Australian prison escapee named Lin (Charlie Hunnam) as he hopscotches his way to Bombay to avoid being captured. While filming portions of the first two episodes in Bhopal, India, production halted due to pandemic restrictions. Those scenes were eventually scrapped and the entire crew picked up and left for Bangkok, Thailand. Everything from the props, dressing and vehicles were shipped to Southeast Asia (although the cars never cleared customs in time for their shoot days).

Even with the hiccup, Kennedy designed a number of period authentic sets that transport viewers back to the 1980s storyline where a Bangkok backlot (and areas of Melbourne) fill in for the slums of India. Below, Kennedy details the seemingly impossible transition, how it affected the production design and the challenges behind filming in Bangkok.

In Shantaram, you have this compelling novel from Gregory David Roberts to pull from. I’m curious; whate were the initial conversations in developing the imagery and color palette?

The weird thing about the process you allude to here is that there were not many substantive initial conversations in this regard. I went on a location scout to Thailand and Malaysia with producer Richard Sharkey, looking for a stand-in location for India, as India was out of the running due to Covid at the time. We spent three two-week stints in hotel quarantine and two weeks scouting Thailand. In the end, Bangkok became the preferred base, just as we got out of quarantine in Malaysia, so that leg was abandoned. This was truly a Covid evolved production process!

Outside of pandemic restrictions, were there any challenges from a design perspective?

I think the most difficult task for me was illustration and convincing people about the historical differences of the time period and place, Bombay in the ‘80s, and the design aesthetics and color palette involved. Even the notion of using bare bulbs and random fluorescent lighting required turning some heads around. But in the end, this was all largely embraced and appreciated. 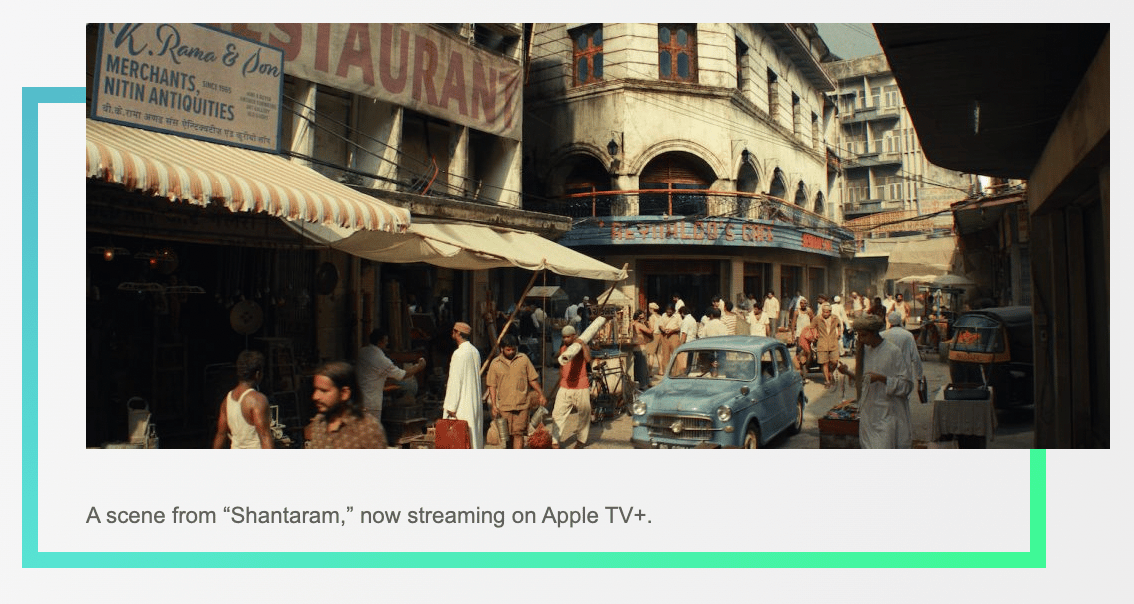 What’s compelling about the series is that we’re pushed into the story immediately and see Lin make a daring escape from prison. Those scenes are shot at Pentridge Prison in Melbourne, which closed in the ‘90s. Were all the elements of the escape available at the practical location, or did you have to blend set builds with practical ones?

The exterior and rooftop in the prison escape sequence are in the exact location of the original escape. Also, the interiors were shot in the remaining wings of the old prison. The interior roof space was a studio set, and the building site section was another location that matched architecturally. Numerous other small sets made up parts of the escape, crawl spaces, manholes, etc., and provided transitional elements to tie the pieces together. 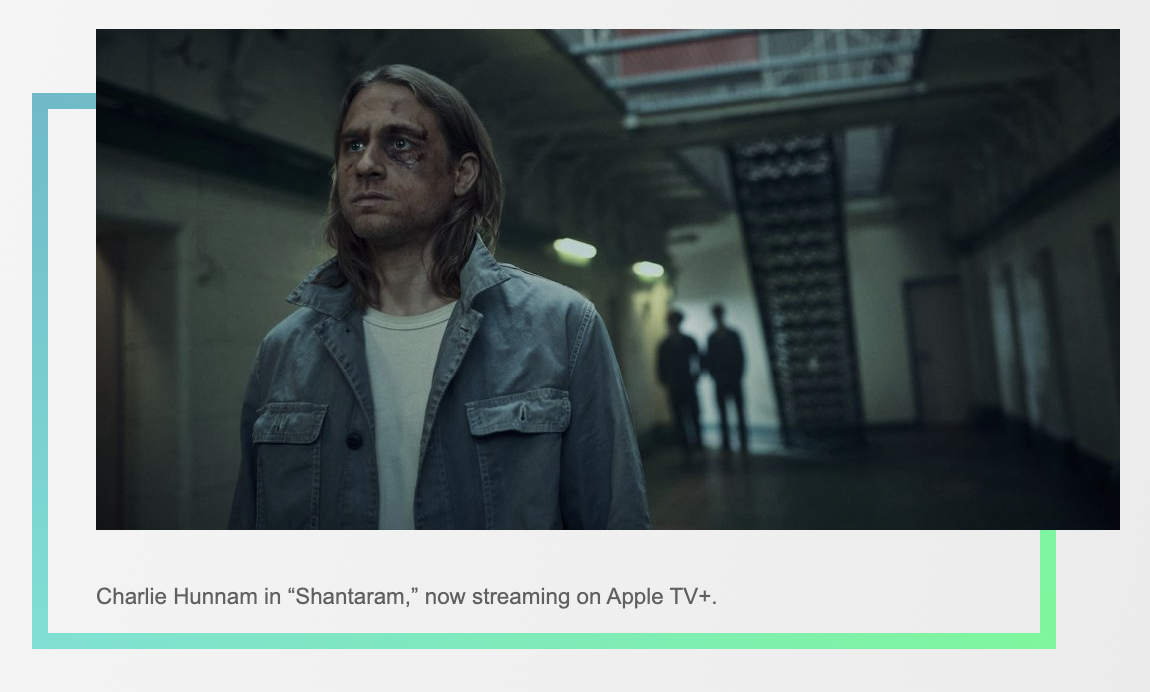 Speaking of practical, the storyline has scope, traveling from Australia to India. What conversations are you having with the location scout to find the ideal settings?

Basically, we were presented with a backlot location in Bangkok, a development site in Chinatown, consisting of several interconnecting streets and numerous blocks of old multi-storied buildings. When dressed, this became the Colaba streets of Bombay circa the 1980s. The slums were built on about four acres of backlot land at Studio Park outside of Bangkok. These two backlots provided the insulated space, which allowed us to continue shooting during the worst of the pandemic. 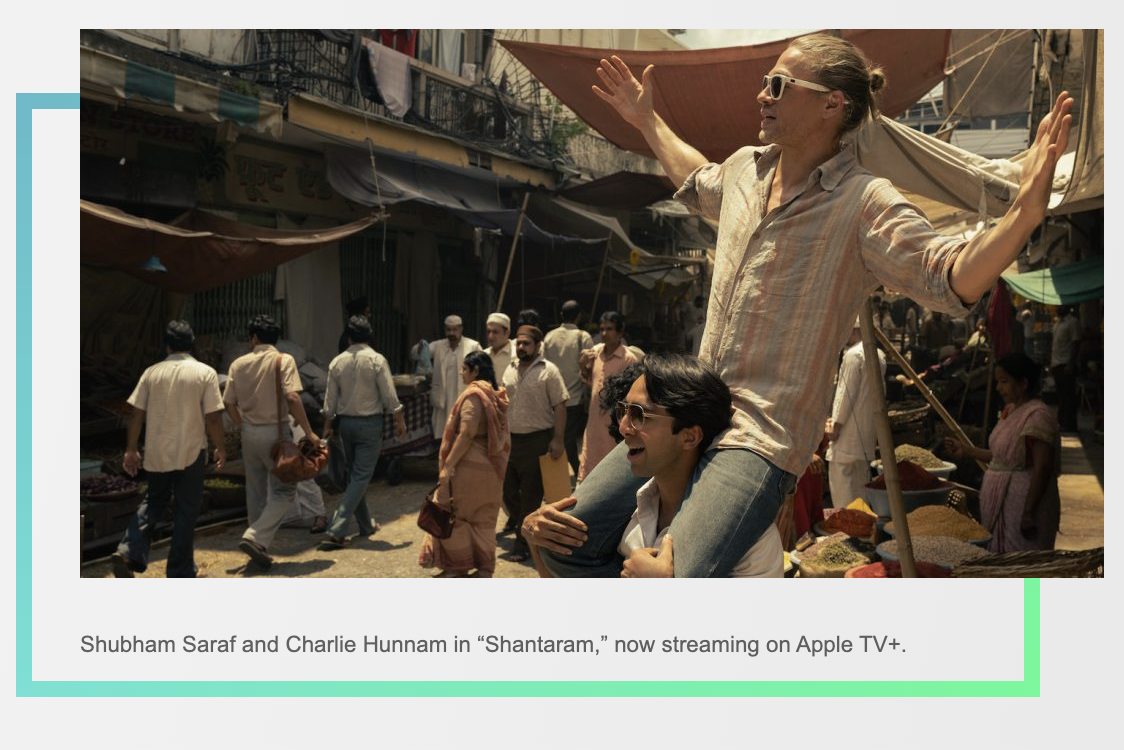 And what about what you filmed in Australia?

In Melbourne, we shot all of the studio sets, Melbourne locations, and various Bombay locations where possible. There was also a seaside interface section of the slum set built in Melbourne. Other locations in Melbourne included the train station in episode twelve, which we built in an old railway shed. The real issues around location sourcing were losing them to Covid and having to constantly re-imagine and reinvent solutions to an ever-shifting situation. To say that this was the most difficult job of my career is to grossly understate the reality we faced over a year and a half throughout the pandemic.

We get to see the famous Chowk Bazaar when Lin initially lands in India. How did you go about recreating it for the series?

It was a fully controlled, dressed, and populated set within the Bangkok Chinatown backlot location. The original iteration of the show – the first two episodes – was shot in India, and this scene utilized a real street. In that instance, they couldn’t control very much or make many changes; as a consequence, the scene was full of largely contemporary elements, signage, costume, colors, vehicles, etc. In Bangkok, we were able to fully dress every shop, create every sign, and build and decorate every element of the entire town. In this way, it was authentic to the period and place. Additionally, it was very practical from a production point of view, as we owned the streets 24/7. 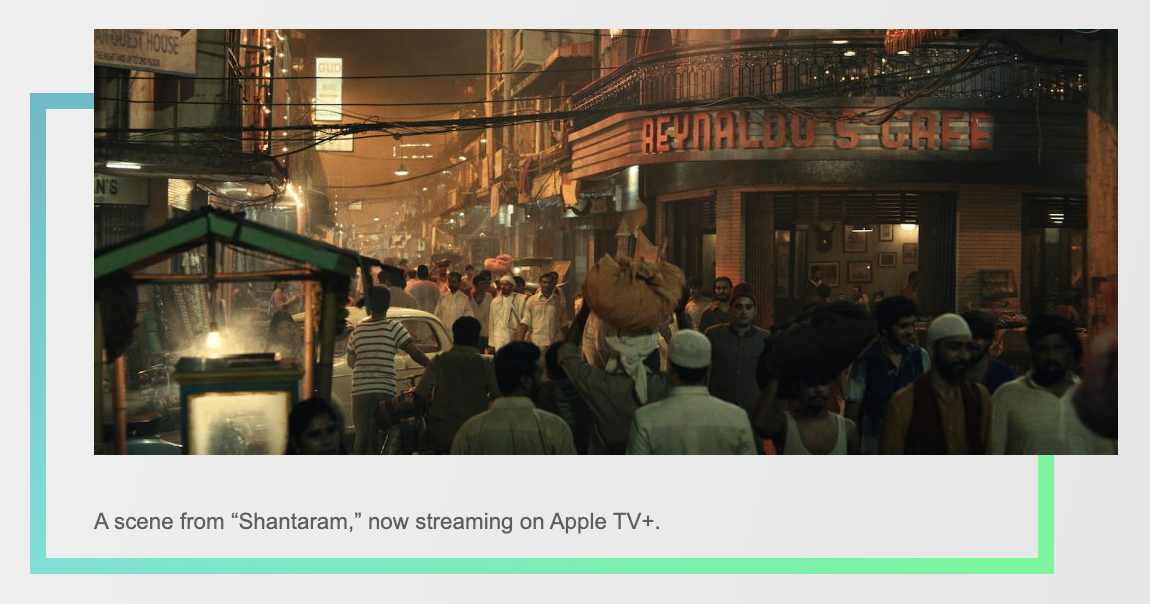 Reynaldo Café is one of the mainstay sets where all the “business” is conducted in the pilot episode. How did you want to approach the build?

It was all shot in the Bangkok Chinatown location. My desire was to build the location into a real location to bring the street life into the interiors. The Reynaldo’s Café set very much benefited dramatically from seeing the real street life passing by from the interior, they blend together. There is so much of the atmosphere of India and the thrill and excitement of the mood being created around the lead characters. Originally a studio set was built in Melbourne for Reynaldo’s, but when the Bangkok location came up, I really pushed to set it there. 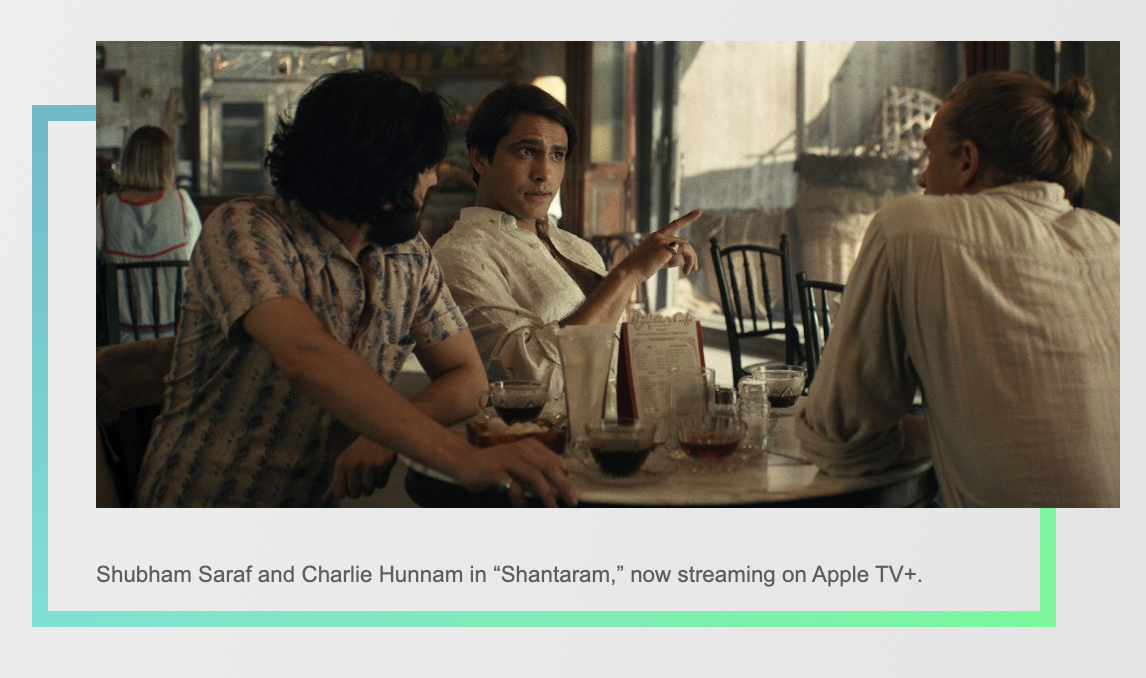 One of the more sinister places in the first episode is The Palace with Madame Zhuo. The use of cyans, blues, and darker earthy hues give it an ominous tone. Was that something you pilot cinematographer Stefan Duscio collaborated on?

Yes, very much so. There were various discussions with the directors about being able to see out the window, but my thought was that this is a hidden, mysterious place. Zhou is like a spider in her lair, in the dark – all seeing but unseen. Much restraint was needed to keep the curtains shut and hold this mood, although she does get to glimpse comings and goings through a gap from time to time. 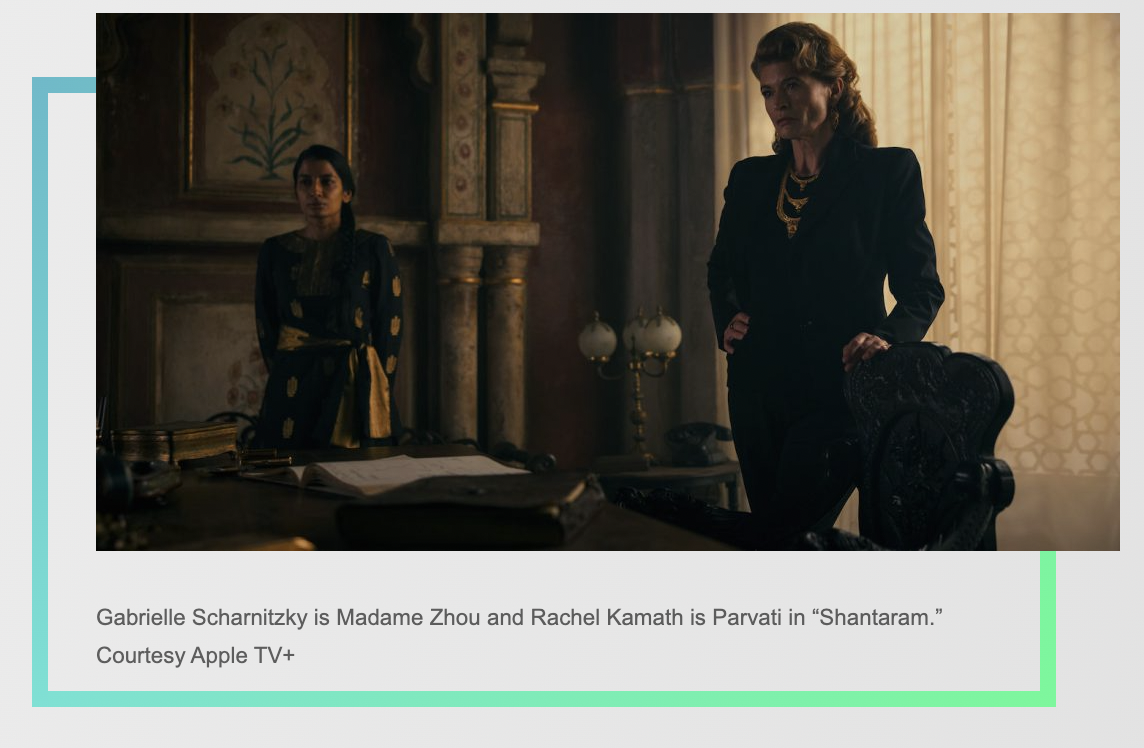 Bangkok during a pandemic cannot be an easy challenge. Any advice you can share for those looking to film there?

It was a matter of constantly improvising.  And during the wet season, storms sweep in and can destroy your sets, only for you to go back and put it all together again the next day. So, my advice? Take a good drinking buddy, you’ll need them!

Facebook and Canada’s Online News Act: One More Problem for a Troubled – and Troubling – Company

An Analogy of the Draft Telecommunication Bill, 2022