Day 2 of the BRICS Film and Technology Symposium was conducted as part of #AzadiKaAmritMahotsav. The first of its kind symposium was organized by the Ministry of Information and Broadcasting, GoI, in association with the Film and Television Institute of India (FTII) and the Federation of Indian Chambers of Commerce and Industry (FICCI).

The first session of the day, Enhancing film viewing experience using recent technologies, focused on Virtual and Augmented Reality content creation: how innovators are creating compelling VR and AR content, and how technology is enhancing the viewing experience. Below are a few takeaways from the session: 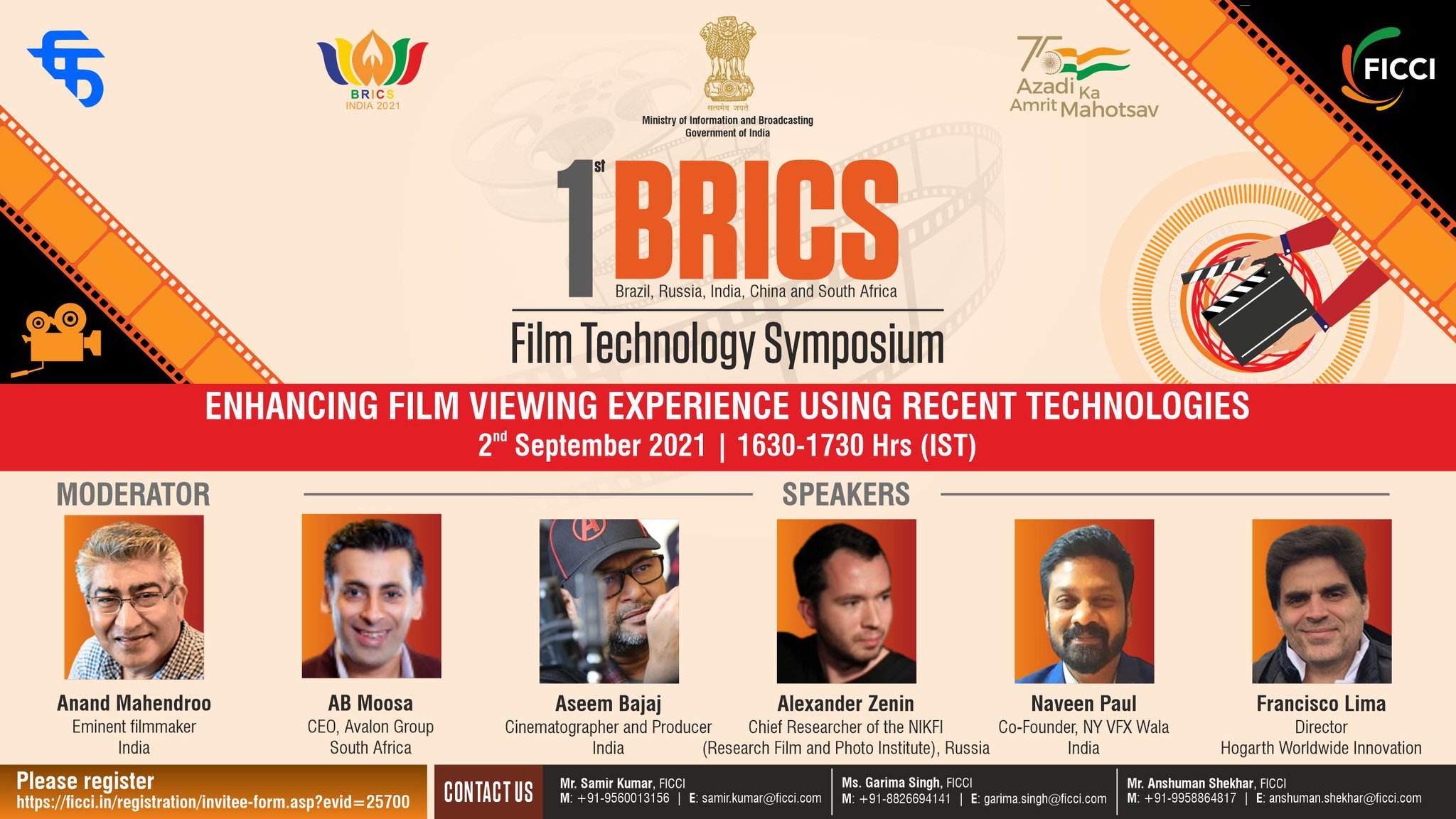 “In Russia, Research is focused on screening quality and augmented reality,” Mr Alexander Zenin, Member, Union of Cinematographers of the Russian Federation, Chief Researcher of the NIKFI (Research Film and Photo Institute), Russia.

“Augumented Reality and Virtual Reality or ‘Extended Reality’ as it is now often referred to, is the next chapter in this revolution brought about by technological advancements,” Ab Moosa, CEO, Avlon Group, South Africa.

“20 years ago, VFX was not used in India as it was used abroad. But today things have changed to the extent that VFX has become an integral part of filmmaking and storytelling. Earlier in Bollywood the kind of jobs VFX technicians would do were cable erasing, etc. but now the entire shot is created in VFX, including some characters,” Naveen Paul, Co-founder, NY VFXwala, India.

The second session of the day, Tomorrow’s Strategies – Understanding Animation Globally with a Spotlight on the BRICS Market, discussed how animation remained relatively resilient to COVID-19 and successfully catered to the rising OTT demand despite pandemic restrictions. A few takeaways from the session: 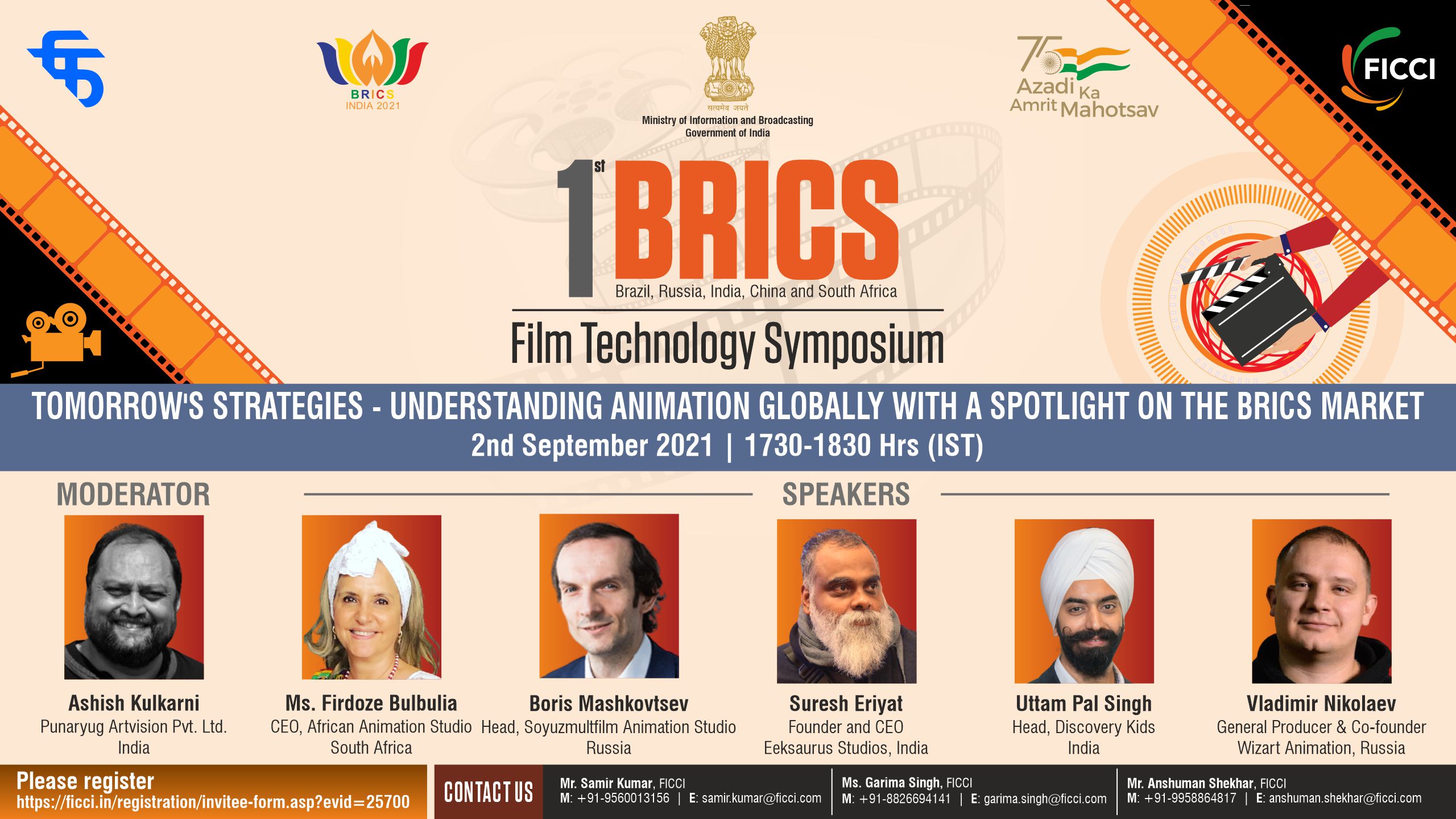 Mr Vladimir Nikolaev, General Producer & Co-founder, Wizart Animation, Russia said, “My dream is to create some local story, like fairy tale from India, as India is a diverse nation.”

We have a huge responsibility as BRICS countries. We need to see what is good for our children,” Ms Firdoze Bulbulia, CEO, African Animation Studio, South Africa.

“In linear platforms like TV, the content is skewed towards boys: it’s a ratio of 65:45. However, when it comes to OTT platforms, there is a demand for content targeted towards girls, and it is being delivered to them as well,” Uttampal Singh, Head, Discovery Kids India.

“This whole deal of spoon-feeding children in the name of entertainment, making it contrived and sloppy is something that I feel one should avoid as kids would outright reject it,” Suresh Eriyat, Founder and CEO, Studio Eeksaurus, India.

For more insights, view the video above.

As part of #AzadiKaAmritMahotsav, the Ministry of Information and Broadcasting has organized the first ever 2-day BRICS Film and Technology Symposium.

“The relevance of audio-visual cooperation between BRICS countries is one of the possibilities of market exploration and cultural diffusion,” Mr. Mario Frias, Special Secretary for Culture, Federal Government of Brazil.

“This symposium is the beginning of a new journey in cinematic partnership, and India is proud to have initiated the first step. Through this event, we hope to explore the various possibilities of enhanced collaborations, including formal mechanisms for student exchange programs among the leading film institutes of our country,” Apurva Chandra, Secretary, Ministry of Information & Broadcasting.

“During the chairmanship of India, we aim to promote institutional building to further deepen, sustain and institutionalize BRICS cooperation. It is important to win the hearts & minds of the people from all BRICS nations & a film symposium is an event that brings together one & all through the medium of cinema technology,” Mr. Anurag Thakur, Minister of I&B, Sports & Youth Affairs, GoI.

In the first session, titled Leveraging Opportunities between BRICS Nations, the panelists discussed how BRICS nations can create a new framework for co-production, exchange of talent pool resources, creativity, funding and tech collaboration. A few takeaways: 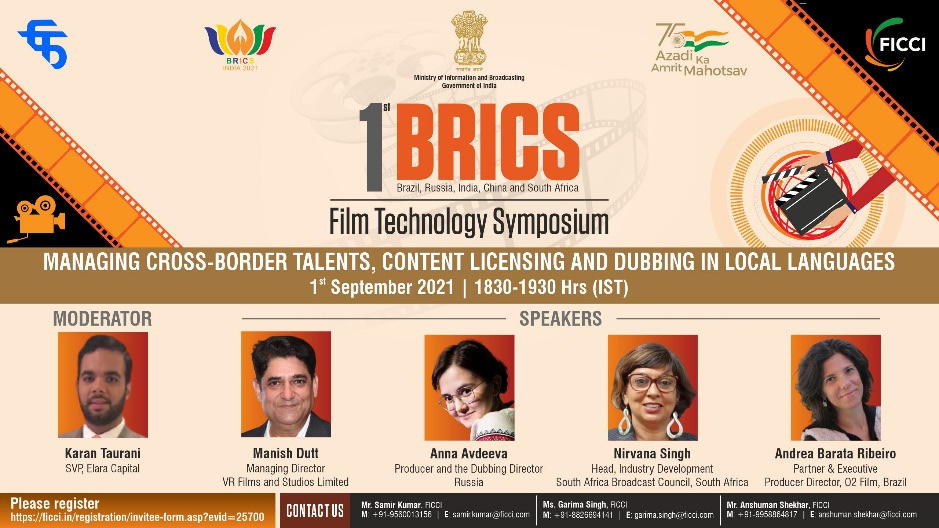 “In order to really have authentic content, there is nothing more important than this BRICS partnership & harnessing that,” Mr Nick Daryanani, Producer, Frame 24, Hongkong.

“Although the BRICS Film Festival is held annually, there is a need to take it to Tier-2 cities,” Ms Arunaraje Patil, FTII Alumni, Member of FTII Academic Council and Eminent filmmaker.

“Creating a common space would mean an increase in the amount of content that would travel among BRICS countries,”Ms Ekaterina Pshenitsyna, Head of the International Department, Central Partnership, Russia.

“The BRICS Film Festival is low-hanging fruit. We need to leverage in the BRICS agreements. In 40 years, BRICS is going to have a larger GDP than the G6 countries,” Ms Xoliswa Sithole, Producer and Director, South Africa.

“India produces 3 times more films than Hollywood. There is a unique opportunity for the entertainment sector to get together and produce across the board,” Ms Lindalias Reis, Co-Founder, Riowood & VP, Chamber of Foreign Commerce, Brazil.

The next session, titled Managing cross-border talents, content licensing and dubbing in local languages, talked about the need to build an ecosystem that enables effective collaborations across BRICS countries. Below are a few takeaways: 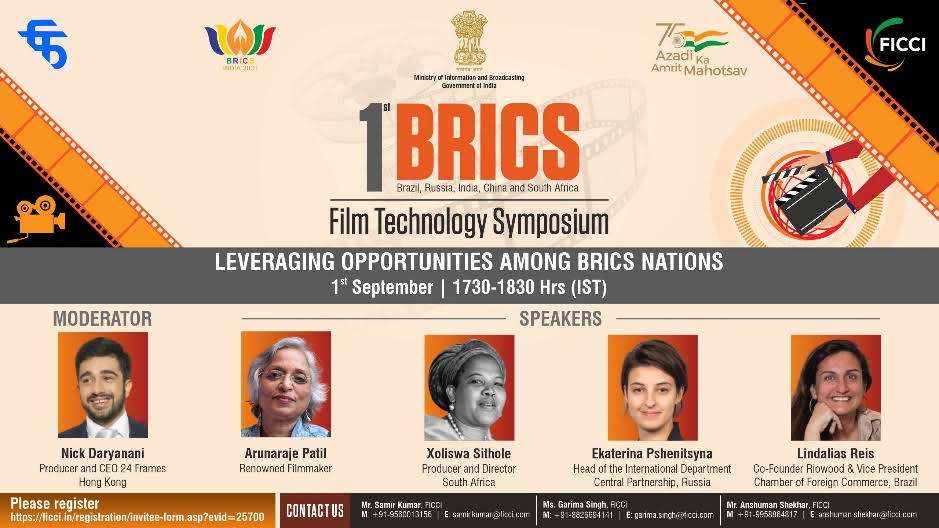 “5G will be a game-changing move that will drive video consumption to another level and increase broadband penetration in India,” Mr. Karan Taurani, SVP, Elara Capital.

“OTT and traditional television are both equally important means of consumption. There is demand for good quality content and always be,” Ms. Anna Avdeeva, Producer and the Dubbing Director, Russia.

“A lot of tax incentives have been offered in South Africa, and as a result a lot of foreign players have come in. However, Covid-19 had impacted foreign production, and since costs have gone up, it remains to be seen if the tax incentives will suffice,” Nirvana Singh, Head, Industry Development, SABC, South Africa.

In the last session of Day 1 of the BRICS Film and Technology Symposium, Technological Collaboration – Preproduction, Postproduction and VFX, the panelists discussed the prospects of the VFX sector in terms of innovation, growth and contribution to filmed entertainment. Here are a few takeaways from the session: 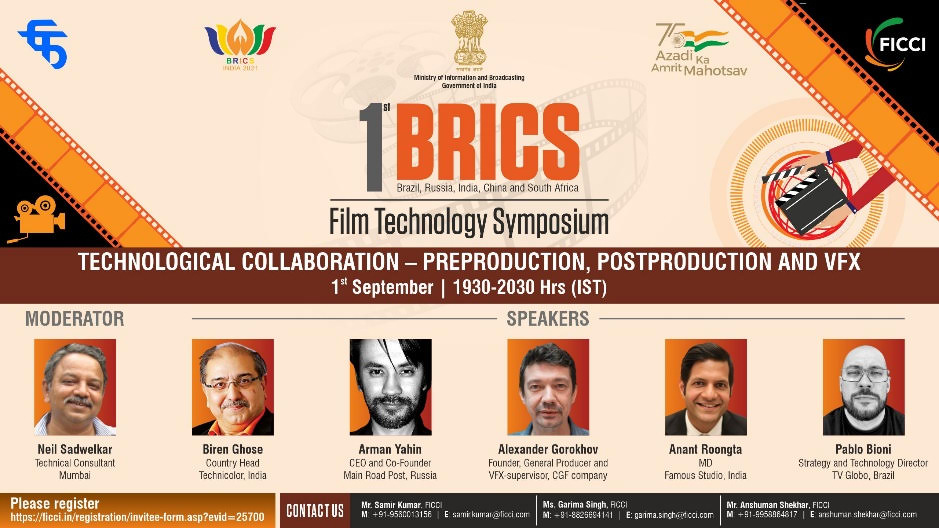 “We are in a position to create a BRICS Creative cluster using our respective talents, and competencies. We can create a virtual clout in the industry,” Mr Biren Ghose, Country Head, Technicolor.

Russia is going global, we are working with global OTT platforms. We have moved from service sector to producing our own shows for OTT platform,” Mr Arman Yahin, CEO- Cofounder, Main Road Post, Russia.

For more insights, please view the video above.

Korean television is a major export success, envied by many film industries across Asia. Now, international streaming services are providing an even bigger stage for Korean shows. Tune in to hear some of Korea’s leading VOD experts consider how the local VOD market is growing, and where it might go next.

The Motion Picture Association and ShortsTV hosted a special virtual screening of select 2021 Academy Award-nominated short films, followed by a conversation with several of the filmmakers.

Our event featured Oscar-nominated shorts “Opera,” “If Anything Happens I Love You,” and “Two Distant Strangers,” along with clips from each of the five films nominated in the Documentary (Short Subject) category.

Following the screening, Pilcher moderated a wide-ranging conversation with several of the shorts’ filmmakers:

Watch the full conversation below:

Disney, Hulu, and the Motion Picture Association co-hosted a screening of The United States vs. Billie Holiday, followed by a special conversation with lead actor Andra Day and ABC News anchor Linsey Davis.

The legendary Billie Holiday, one of the greatest jazz musicians of all time, spent much of her career being adored by fans across the globe. Beginning in the 1940s in New York City, the federal government targeted Holiday in a growing effort to escalate and racialize the war on drugs, ultimately aiming to stop her from singing her controversial and heart-wrenching ballad, “Strange Fruit.” Led by Oscar-nominated director Lee Daniels and Oscar-nominated singer-songwriter Andra Day, The United States vs. Billie Holiday unapologetically presents the icon’s complicated, irrepressible life.

MPA Chairman and CEO Charles Rivkin talks with actress, director, and producer Jodie Foster about her Golden Globe-winning role in The Mauritanian.

A24, Plan B, and the Motion Picture Association hosted a special screening of Minari, a stunningly beautiful film that captures timeless universal truths about the immigrant experience.

A tender and sweeping story about what roots us, the critically acclaimed film follows a Korean-American family that moves to an Arkansas farm during the Reagan Era in search of their own American dream.

The screening was followed by the panel discussion below, moderated by Ramy Youssef and featuring writer/director Lee Isaac Chung, producer Christina Oh, and actor Steven Yeun.