As we’ve done for the past few summers, we’ve compiled a few of our favorite interviews to highlight in this last week of August. This is by no means a comprehensive list, but a little taste of some of the great conversations we’ve had during these hot summer months. Bring on sweater season.

Based on everything from the reviews to the overwhelmingly positive chatter online to the 5-minute standing ovation at Cannes, Top Gun: Maverick seems destined to become Tom Cruise’s biggest weekend opening in his career, which is saying something. For the sequel to the beloved 1986 film, Cruise, the film’s executive producer and star, waited until he had a great story and the right people in front of and behind the camera, which included producer Jerry Bruckheimer and director Joseph Kosinski. It was also essential to Cruise and his team that the US Navy was willing to take part so that the production could be shot with practical effects, with the actors playing pilots filmed in real jets. For this incarnation, Cruise literally had a need for speed.

In Top Gun: Maverick, Pete “Maverick” Mitchell (Cruise) is called to train former Top Gun pilots to fly a nearly impossible mission. Mav shares a complicated past with one of the aviators, Bradley “Rooster” Bradshaw (Miles Teller). Rooster is the son of Mav’s former wingman Goose (Anthony Edwards), the best friend he lost in a training accident in the original film. Helping with guidance and support is his longtime friend Tom “Iceman” Kazansky (Val Kilmer) and old flame Penny (Jennifer Connelly).

All these pilots are the best of the best, but to ensure survival and success, Mav has to make them even better individually and as a team. Among the chosen are “Hangman” (Glen Powell), and “Coyote” (Greg Tarzan Davis). The Credits spoke to Powell and Davis about the rigorous training Cruise designed to prepare them for flying in F18s and pulling G-forces like real Top Gun pilots. 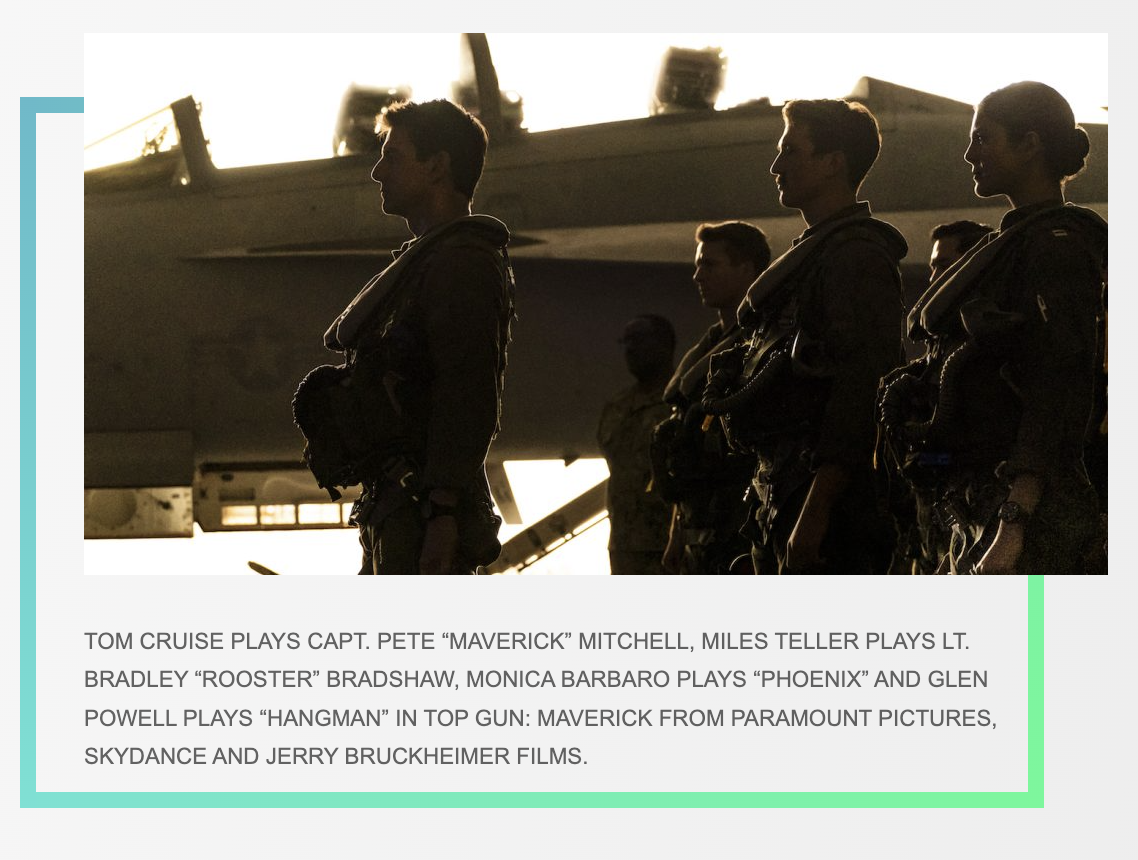 The Navy committed to putting actors in the back of F16s to prepare you, Tom Cruise built individual flight training programs and checked the detailed forms you filled out each day as you went through it. What were some of the notes or hiccups you experienced, and how did Tom and his team adjust the program in response?

Powell: I was a sarcastic asshole in those things until I realized Tom Cruise was actually reading them. The whole preparation, his whole thing is ‘practice like you play.’ Make it harder before you have to actually go up there and act. For me, one of the hardest things to do was recover from the sustained G’s. I could pull 8 1/2 or 9 G’s when we would do those little pop-ups all day, but these sustained G’s, these death loops where you have to be doing them for as many as 30 to 45 seconds, they get harder and harder. You just get smaller, so that you’re trying to keep blood in your head over the course of almost a minute. Knowing that I didn’t recover as quickly mentally, that I had to take a second to breathe, he thought, ‘We should probably do more of those.’ 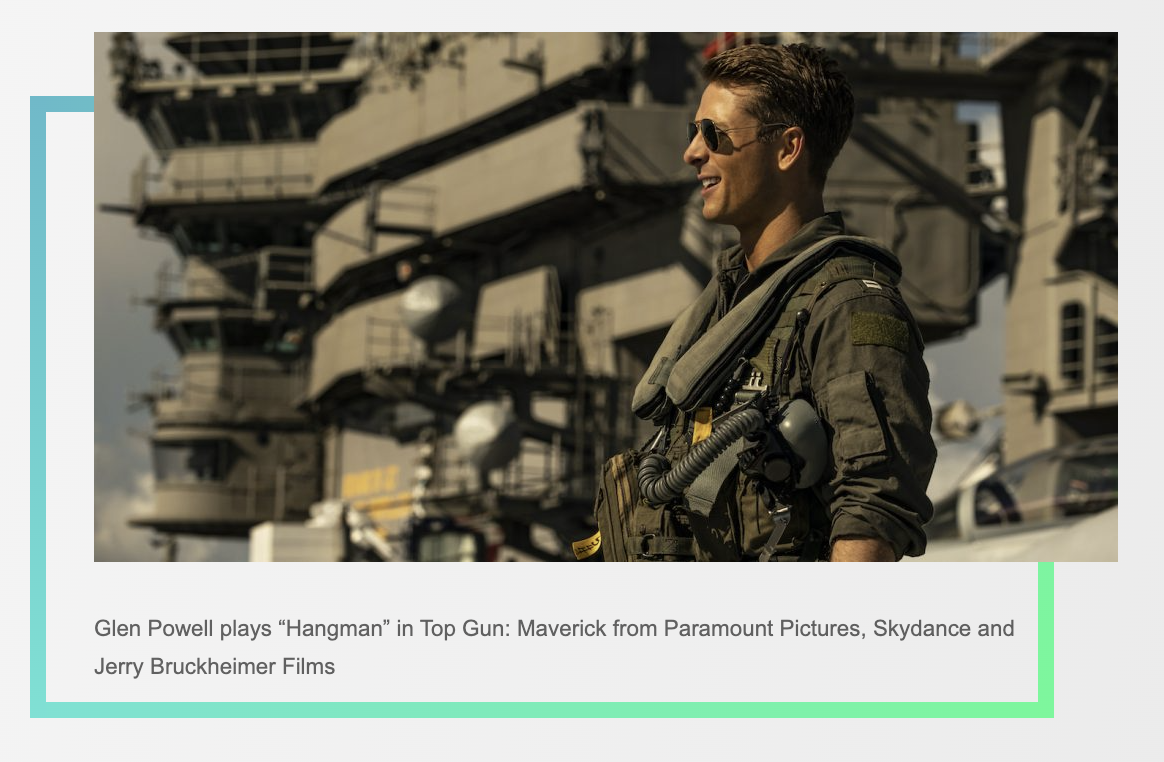 How about you, Greg?

Davis: I wanted to make sure that I was actually capturing those moments and looking believable, and I didn’t want to pass out. So I would ask Tom, ‘How can I get better in this?’  The best way to get better is to do more of it, so I was doing it constantly, over and over, the high G pulls. You’re just trying to push yourself to feel what it’s like to blackout so that you won’t necessarily get to that point. You will know what it feels like and know how to counteract what’s going on. If we didn’t have that program, there is no way we would be able to do what we did in those jets and have that great footage. What it does to your body and your face and everything, if you’re untrained, it’s horrible. We had to look like we actually graduated from Top Gun. So with that preparation, it really helped make us look as though we’ve been doing this for years.

Do you think it’s more a physical or a mental game when you’re up there?

Davis: Both. I do think it’s mental over physical because I had the battle of, ‘I don’t want to be the one to blackout. I don’t want to be the one to throw up. This person did this many G pulls, so I want to be able to do just as many or more.’ I think we had that camaraderie of competitiveness that kept us going. On the physical side, you don’t feel that until really after the fact. I mean, sometimes during filming, you have to shake off the G’s, like, ‘let me breathe, let me shake off the sickness,’ but it was really once you get to the ground. I would need to just lie down in my car for an hour after training because you can’t drive off; you’re just so exhausted. It’s like you got into a car wreck a few times, there are times when you’re cold and you just have to sleep, so I will go with mental first and then physical. 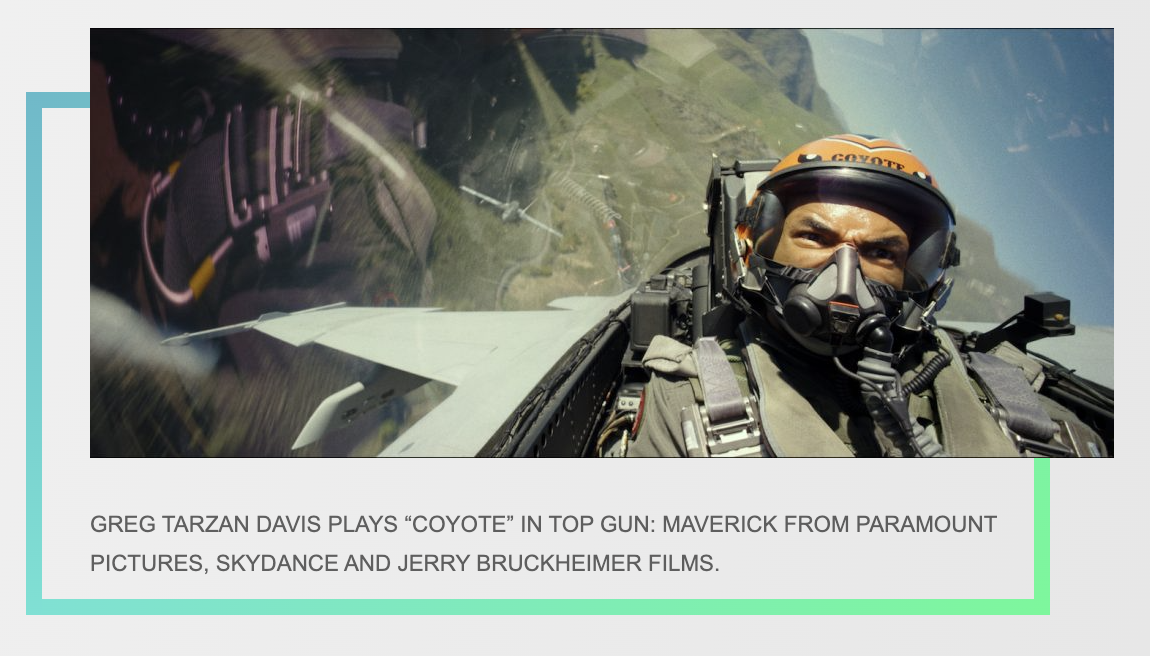 Powell: I think the one thing I learned from Tom is he’s maybe the most headstrong person I’ve ever met in terms of his ability to use mind over matter in every case. It’s actually unbelievable the things that you can will yourself to do, and what he does will himself to do is incredible. I would say that’s the interesting thing that I also learned about Top Gun pilots in general; with flying, they have to be athletes in the air, but they’ve also got these engineer brains. They’re doing math while blood has been drained from their heads. It’s unbelievably impressive. So I do find it to be a hybrid, but I also find the ability to take that consistently, to get into that plane every time, knowing it’s gonna hurt you a little bit. Miles [Teller] left one flight, and the capillaries in his whole back were burst. There was so many G’s that the blood was trying to be pulled through his back, and his whole back was a raspberry. That’s pretty consistent. It’s called G rash. That happens to a lot of people, and with Miles, his whole back looked like someone had beaten him. It was bad.

Davis: There were times when the next day you knew you had to fly, you were like, ‘Okay. Okay, yeah. Let’s go. Let’s go.’ Then you would get in, and you’re sitting on the tarmac or the taxiway for 30 minutes, and you’re trying to like tell yourself, ‘Okay, only an hour and a half or two hours. I got this. I got this.’ It was definitely mental warfare that you were playing with yourself.

This is all done live. You were operating your own cameras, considering the shots, the lighting, and remembering your lines. What did the practical experience and the challenges of the shoot teach you about film that, as an actor, you never expected to learn?

Powell: Tom is such a great film teacher. He loves this stuff, and he loves when he can impart knowledge and experience to other people. At least for me, when he was teaching us about film for up there, where we had to be our own directors, our own crew, he would tell me right before a flight, ‘Hey, there’s gonna be a look to Phoenix and Bob. I want you to get one that’s really slow. I want you to give one where you just do your eyes to the side. I saw this Lee Marvin movie. Lee Marvin has this one thing where he almost gives, like, a side-eye, and then he keeps going. Give them a little smirk.’  We’re shooting for X amount of time up there, and he’s like, ‘Just give me as much good stuff as you possibly can.’ What you realize is, this is how he crafts a movie. It’s all intentional, but he knows the movie is going to find itself as we make it. That was one of the big things I learned up there is putting yourself out there and trying as much stuff as possible because Tom is not afraid to look stupid. At the end of the day, we all look cool because we’re not afraid to look stupid.

Davis: Just learning everybody else’s job and understanding why this person is doing this to help make the film look the way it looks. For example, learning why we need the lighting done a certain way, as well as learning how to edit in your head, because you’re also editing the movie while you’re up there, like, ‘I think I got that part, and if I look here, then I know they can cut it here.’ It’s being aware of the full picture. When we say it was a masterclass from Tom, it was a literal masterclass of every element of filmmaking that we’re all taking on to our next jobs, and I feel like a much wiser storyteller.