It’s that time of year—we look back on a few of our favorite interviews from 2022 in our annual year-end list.

Deploying West African folklore to interrogate the myth of the American dream, writer/director Nikyatu Jusu‘s debut feature Nanny is a remarkably assured genre-melding experience. Nanny also gives viewers something that’s sadly still quite rare—it evocatively places us inside the head, heart, and aching soul of Aisha (Anna Diop), an undocumented Senegalese immigrant trying to navigate the mystifying codes of the United States to create a stable place to bring her son, Lamine (Jahleel Kamara). Jusu’s nimbly executed deployment of supernatural characters to critique the myth of the American dream would be a difficult feat for a veteran writer/director, let alone a young filmmaker making her very first feature. It’s for this reason that Jusu is the Motion Picture Association’s choice for their inaugural MPA Creator Award, which is part of our centennial celebration.

“I’m immensely grateful,” Jusu says. “I know it’s the first year of this award, but I was like what? (Laughs). I’m just drowning in gratitude.” Jusu isn’t just drowning in gratitude, she’s also dealing with the whiplash of the whirlwind execution of her stunning debut. She shot Nanny only last July in 27-days in New York City, powering through an intense post-production in August, submitting the film to the Sundance Film Festival, and then winning Sundance’s top award, the U.S. Grand Jury Prize, all in the span of 6 months. “I’m still a little breathless at everything that’s happening,” Jusu says. 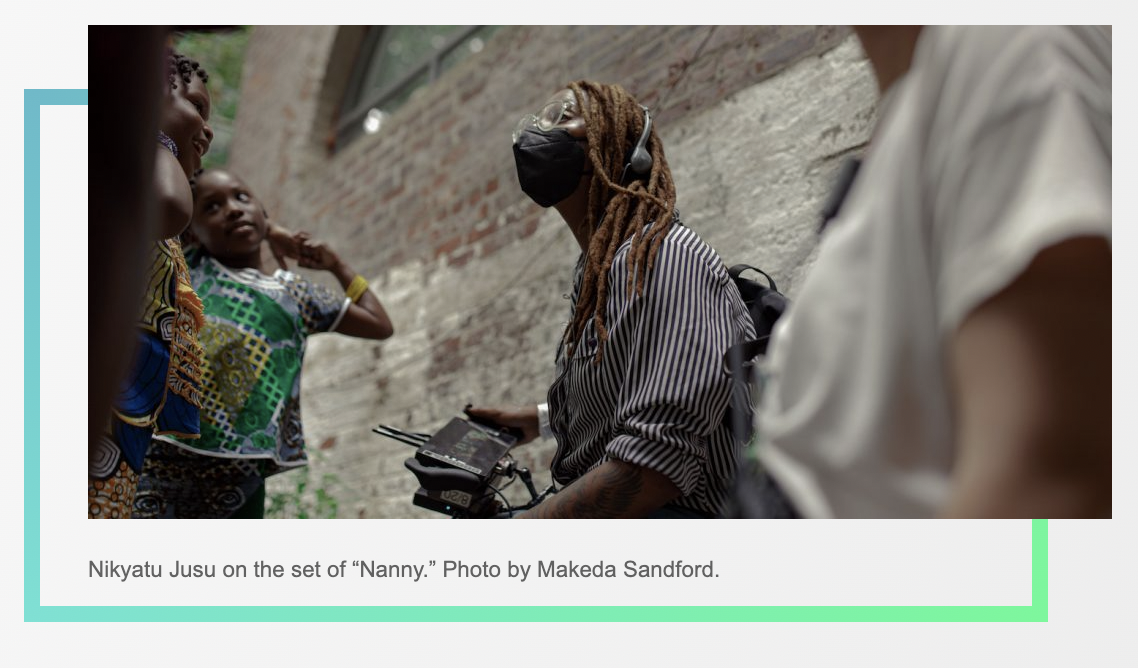 Nanny teases out the pain and fear associated with leaving your home and your loved ones to create a new life abroad, as well as the relentless second-guessing of whether or not you’ve made the right decision. Aisha gets a job as a nanny with a family that initially seems sane, even ideal. There’s the liberal, hard-working mother Amy (Michelle Monaghan), her husband Adam (Morgan Spector), and their daughter Rose (Rose Decker). There’s the elegant Manhattan apartment. Yet it becomes clear that while Aisha is entrusted to take care of Rose and become a nominal part of the family, her life, her interiority, and her hopes and dreams for her own son back in Senegal are expected to be all but nonexistent. She’s a nanny, and her world is supposed to consist of being subservient to Amy, Morgan, and Rose.

“I remember going to class daily while at NYU and seeing these black and brown women pushing mostly white children in strollers in the city,” Jusu says. “It was like a visual manifestation of some of the domestic work my mom had done on and off in the south, growing up in Atlanta. It brought a tangible image to a story that had been percolating in my head about an African woman who’s a caregiver. I went down a rabbit hole of research about domestic workers in the city. I’ve always been curious about that exchange of labor, and what does it mean to inhabit somebody else’s home and raise their children, but still be undervalued. It’s such an important job with such high stakes, you’d think it would be treated with much reverence.”

Jusu began crafting the script over a period of roughly 8 years. “All of these themes were percolating, but I didn’t want to make a straightforward, preachy, pedantic 90-minute PSA,” she says. “I didn’t want to do a straightforward drama, either. I wanted to do something that felt a little more mainstream, a horror or a thriller. Those darker genres have always been intriguing to me. All of the filmmakers I admire—Lynne Ramsay, Boon Jong-Ho, Park Chan-work, Denis Villeneuve—utilize genre to get the audiences to feel empathy towards a character they wouldn’t normally pay attention to.”

Jusu’s crucial insight was incorporating supernatural characters from West African folklore to tease out Aisha’s growing desperation as she works for the increasingly demanding Amy. “Please, make this space yours,” Amy says to her nanny, a moment before handing her a binder full of rules and guidelines. Aisha’s visions—or visitations, depending upon your take—from Anansi the spider, a diminutive trickster whose quick wits help it best bigger rivals, and more terrifyingly, Mami Wata, a water spirit whose motives seem, on first blush, to be murderous, begin to pull at the threads of her sanity. The constant threat of deportment, let alone of never seeing her son again, create and nurture these nightmares.

The melding of genres—horror, psychological thriller, domestic drama—comes naturally to Jusu, who looks to the frequency with which her favorite foreign filmmakers deploy multiple genres to tell a single tale. “The goal was always a slow burn,” she says of the pacing for Nanny. “I had to almost hold my mom hostage to watch Parasite because so many people are conditioned to a barrage of stimuli, but what I loved about Parasite and Bong Joon H’s work, in general, is you get oriented to who these people are and their relationships. If you help me care about these people, I’ll go with you wherever you want to take me by the third act.”

Jusu was also aided by her work in Sundance’s screenwriting and directing labs, where she was paired with filmmakers who understood what she was driving at.

“I had mentors like director Karyn Kusama and screenwriter Michael Arndt, and their feedback was just so smart,” Jusu says. “I’m a voracious note-taker because I know I’m not processing in real-time. I had a color-coded system, I organized it all in Google Drive, and I kept getting the same notes in my early draft…my mythology and supernatural elements weren’t melding with my storyline, so I was challenged to make them cohesive. I dug into what those supernatural elements meant—like grief and depression—and I was able to cement that folklore in Aisha’s character arc. These mentors helped me ask myself what was activating these creatures and how did they impact the way Aisha acted.”

Creating the creatures was a major feat. Without a massive budget to spend on VFX, Jusu had to find ways to get the visions she had in her head, and on the page, onto the screen. That required scaling back some ambitions, but in that process she found that less was often more. She also turned to one of the absolute masters of creature features for inspiration.

“Guillermo del Toro is someone I studied deeply,” she says. “I went down a rabbit hole with his interviews and the way he approaches creature creation. Do I think what we ended up with is 100% translated from what I envisioned? No, but do I think it came out great? Absolutely? For example, I originally had this massive spider taking over the condo, but then I had to creatively pivot around this, and I realized it’s easy to make a large spider shadow if a small spider walks in front of a light source. Little concessions like that are part of the learning process. Then our mermaid figure was the most ambitious and hardest, both with CGI and practical effects, but everyone just came together to pull off these visual elements.” 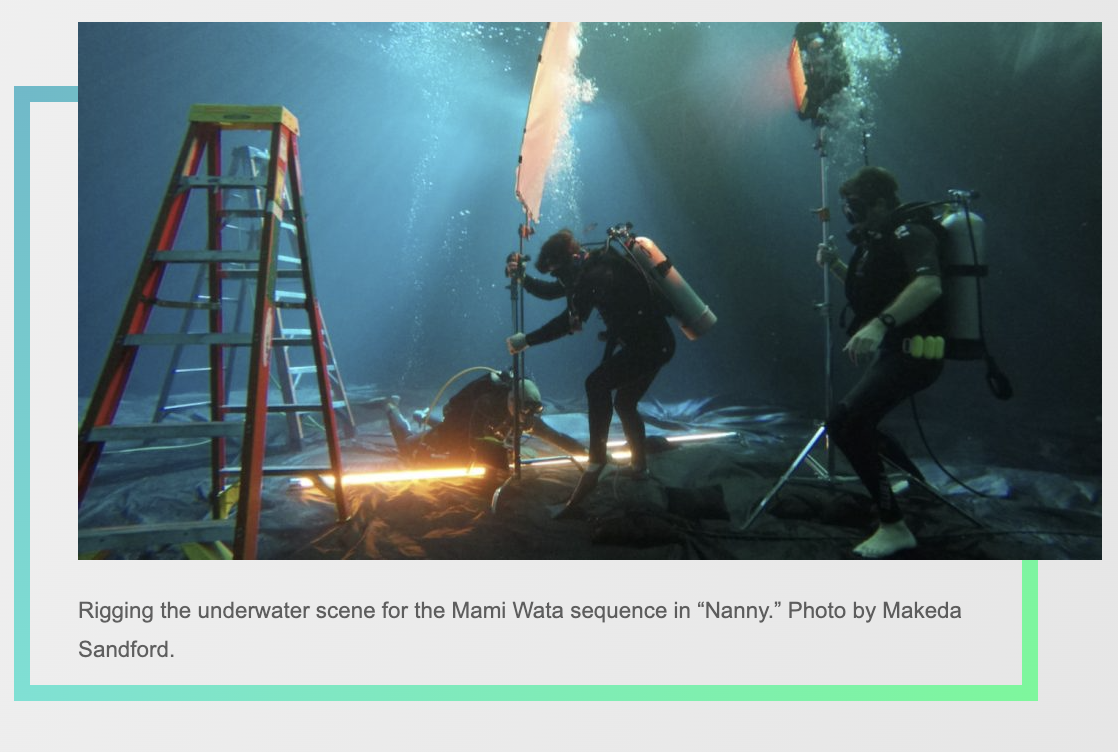 While Anansi the spider and Mami Wata the water spirit give terrifying life to Aisha’s internal struggles, the relationship between Aisha and her employer Amy is both highly believable and deliciously specific. Jusu says one of the ways she was able to get inside their dynamic was that she could relate to both characters.

“I think this whole girl boss/mom boss is tricky because patriarchy and feminism and the capitalist paradigm are complicated,” she says. “For a lot of women who are high achieving and want the perfect house and life, it’s very hard to balance all that, and something is going to crack. This system we’re all maneuvering in is not quite conducive to raising a family within a community. We’re all in these individual spaces hiding away, hiding our dysfunctions, in our little family. I know so many Amys, women who have this beautiful veneer on the outside but who are falling apart internally. Michelle [Monaghan] gave so much fat and tendon and texture to who Amy was because Amy could have easily been a caricature. All of these characters have pieces of me, from Amy to Aisha to Rose, so it was easy for me to try and write this woman. She and Aisha have a lot in common, actually. Everyone is suffering in different ways, and there’s no ideal to be reached. I just needed the right actors. “

The most important actor was, of course, Anna Diop, and Jusu fought hard to get her in the title role. Diop currently co-stars in Greg Berlanti and Akiva Goldsman’s superhero series Titans, so finding a way to get her to work on an ambitious indie film wasn’t easy, but both writer/director and star were committed to making it work.

“She possessed everything I could have imagined,” Jusu says. “I was worried about casting, this is the type of film that could easily fall apart in casting and execution, but Anna is so graceful and smart, and I think she’s been underutilized in this industry and I’m excited for people to see her depth and ability. She’s also Senagalese-American, she even has this distinct vaccination mark that West Africans have, including my mom and dad have it. And she was so passionate about getting the accent right.”

Jusu’s achievement in Nanny is such that the film and its many thematic, visual, and genre elements feel exquisitely balanced as the story churns towards its climax. Yet she’s happy to concede that she’s still learning a lot about her craft. The fact that she made her feature debut in the midst of a pandemic also added an extra degree of difficulty—and mortal dread—that she’ll hopefully never have to duplicate.

“We filmed this really intricate opening shot,” Jusu says, describing a single, flowing scene without any cuts, where the camera floats down a hallway and turns upside down. Her vision was to marry that opening to an equally intricate ending shot. “We ended up chopping it up and not even using that opening or ending,” she says. “That was something we figured out in the edit. This is what you learn as a feature director—don’t be too married to your style, and remember that the most important thing you have to do is to serve the story.”

Nanny is a riveting story you won’t soon forget, while Nikyatu Jusu’s story is only just beginning.